Automation testing is a process in which a testing tool which is also another software application is used to test the system. Test scripts are created and executed and then the results of these tests are compared with expected results. It is always wise to automate repetitive but essential testing processes as it saves a lot of time. 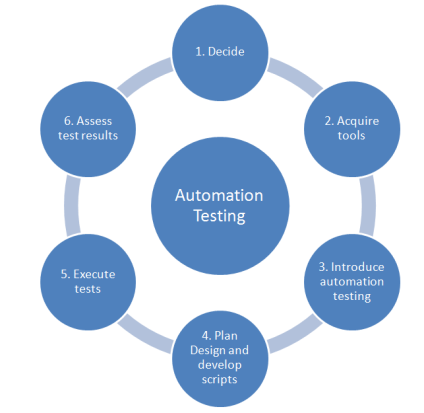 All aspects of software cannot be covered via automation testing. However, automation testing is of great help in testing GUI aspects, database connectivity etc. It is best to go for automation testing when you are working on large and complex projects where there is a necessity to test certain areas frequently. Automation testing is also good for testing those applications which will be eventually used by several concurrent users. This form of testing helps in saving a lot of time so the team gets more time to focus on the quality of the software.

In order to perform automation testing, you need to know the following details:

There is no doubt that automation testing makes life a lot more easier but just having the right tools is not sufficient to achieve success in automation testing. It is very important to develop a strategy for automation testing that would clearly define which sections of the software require testing, how this task would be carried out, how and where the scripts will be maintained, how the project would benefit from this activity and how much money would be saved in this process. The more specific you are in defining the strategy; the more successful you will be in achieving your testing goals.

While defining the strategy it is important to break down your aim into smaller goals and check if you are able to achieve what you require with the help of an automation test tool. If the project is too big and you try to test complex areas in the first go then there are chances of making mistakes. So, it is wise to start small initially and then gradually grow.

Automation testing can be carried out in unit testing, integration and system level testing. It is always better to uncover maximum defects in early stages of software development hence it is better to plan automation testing as early as it is possible.

Software Test Automation And Its Return Of Investment (ROI)

ROI for Software Test Automation is calculated to know how the company would benefit by incorporating this methodology in its testing processes. It gives a fair idea about the cost saving, scope of improvement in efficiency and software quality.

It is difficult and not wise to automate all testing. So, one must clearly determine which test cases should be automated. You must first look at those sections of the software that require repeated testing. Test cases that have to be executed repeatedly and require a lot of data for execution should be automated. Besides, repetitive tests, you should also focus on automating:

Test Cases Not To Automate

There are certain test cases that are not preferred to be automated. Such as:

How Do We Want Automate?

Automation of a test case begins with defining what you want to test. Always go for those test cases that are independent and stable. It is always better to execute smaller independent test cases rather than few big and complex ones. Large scripts are difficult to maintain and can be difficult to execute if any major changes have been made to the software. If a test script requires a change then it is always easier to make changes to a shorter script than a longer one.

Ensure that you have taken care of all validations in your test scripts. If you are planning to test database transactions, then you need to make sure that database has the necessary data required for testing.

Before executing the test case it is important to understand how the automated software tool has been designed. This is important because once you start testing you don’t want to get interrupted by unknown issues.